Below is an article from the Alberta Farm Express that shows Canadian Canola stockpiles are at their lowest levels in 4 years.  Wheat stockpiles meanwhile have increased.  A report like this makes it very likely that the indication we have been hearing of a record amount of canola being planted this year is true.  It is going to be an interesting crop year in 2017.

Canadian stockpiles of canola dwindled to a four-year low ahead of planting season after brisk demand from crushers and exporters, but wheat supplies swelled, according to a Reuters survey of 12 traders and analysts.

On Friday, Statistics Canada will estimate crop supplies as of March 31, 2017, from commercial and farm storage. The report is based on a farmer survey and government data, and offers a snapshot before farmers sow the next crop.

The average estimate pegged total canola stocks at 6.7 million tonnes, down 22 per cent year over year, and the smallest early-spring supplies since 2013.

Rising canola prices are a good indication that supplies of the oilseed are running thin, said Chuck Penner, analyst at LeftField Commodity Research.

More than one million acres of canola, wheat and other crops are still in fields, according to government and industry estimates, with quality unknown, after wet October weather pre-empted harvests.

All-wheat supplies jumped 27 per cent to a three-year high 18.3 million tonnes, according to the average estimate, while durum stocks were seen nearly doubling to 5.2 million tonnes.

While durum stocks appear high, quality problems mean that much of those supplies will be used only for animal feed, Penner said.

Canada is the world’s biggest canola exporter and a major wheat exporter. 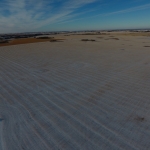